The Spirit of a Healing Practice - Angela Jamison Part 2

"A lot of us Ashtangis, we're all or nothing people, and we got to learn to show up with gentleness and with a lot of presence and without expectation. Cause we will burn out." - Angela Jamison I went through ups and downs in my body that first 10 years, and I think not talking about it enabled me to process faster cause I didn't make a thing of it. I was already doing a lot of sitting practice so I can kind of see the way the concepts interacted with the tissues. And especially as my emotional body started to become conscious, I would see how much grief and pity and fear would come up around tweaks in... "I think that that's kind of a nice story because it's specific and that it's saying yoga's not about what's going on on the outside. It's not about how much you know about the Vedas, the wisdom and how great a yogi you are." - Harmony Lichty, Mythology of Ashtavakrasna One of my favorite ones, Ashtavakrasana and it's always like the pose that's all on the social media, everything. But really, Ashtavakra means one who's bent in 8 places. The story is that he was in his mother's womb and his father was chanting the Vedas. He was already sort of this very high being coming back to birth. His father was chanting the Vedas and he kept making mistakes.... 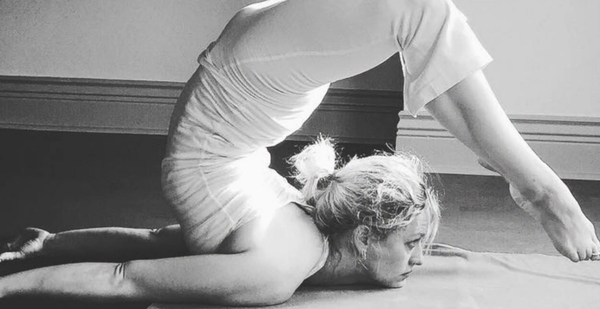 "Don't fight. Your neck is broken, and if you fight you'll be paralyzed." I had an instant physiological response to that, and became paralyzed. - Angela Jamison What does the term strong practice mean to you? Consistency. Commitment to action. Detachment from the results. Discipline, dedication, devotion thing helps, too. So strong practice is dispassionate actually on some level. The Other Side Of Falling - by Fiona Stang & Derick Yu

It is good to sometimes see the opposite side of what you normally experience. If you can experience the opposites, you can find the middle, the mid line, the still place in the center between the two extremes. That's a good place to find, and a good place to be. - Fiona Stang Derick Yu: I wanted to take some pics and footage of Fiona’s practice that day for the purpose of reference for an upcoming workshop. While filming, I started to notice that she wasn’t having the best of days (given Fiona just recovered from being slightly ill, plus the previous weekend had been hectic). It became obvious that Fiona was still going to keep on practicing and doing whatever...